I love wah pedals. My musical taste finds the humble wah featured on many of the albums I own with guitarists such as Hendrix, Slash, and Hammett making the most of the famous treble sweep. 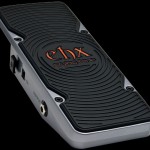 Traditionally, wah pedals consist of a rocker pedal that when moved up and down, engages a potentiometer.

This is all well and good, but after time, the potentiometer can break, the mechanics can get all dusty and “scratchy” not to mention it can somewhat be a challenge to actually engage the footswitch at those key “rock god” moments!

The “Next Step” series of pedals from EHX feature the same characteristics; no moving parts other that the actual pedal – no potentiometers, optics or magnetism.

It has to be said, when I opened the EHX Crying Tone Wah I couldn’t help but think how Space Age this pedal looks. EHX really seem to be pushing the boundaries with technological design, yet at the same time ensuring the use of the pedal is as easy as can be for the guitarist.

The main feature of the Crying Tone Wah (other than the actual rocking chassis), is the calibration switch. This is used to initially set the sweep and may need to be reset (takes a couple of seconds) if moving the pedal from a flat surface to an angled surface, such as a pedalboard.

The calibration switch can also be used to obtain some “hidden” wah tones (see the video below).

This is a 9v powered pedal, with a battery included. The EHX 9 Volt power supply is optional. The EHX logo lights up when in use too!

This is so easy; I was up and running in a few seconds. Simply place the pedal on the floor surface, engage the calibration switch for a couple of seconds and you’re ready to go.

As soon as you engage the rocker, the wah is activated. To turn off the wah, simply push the rocker forward to a flat position – easy!

Great wah sounds. I A/B’d this pedal against my standard CryBaby Wah and the EHX Crying Tone has more sweep and range. It’s a very expressive wah and at times sounds extremely “vocally”.

I managed to obtain a good range of sounds; from ‘70’s funk to a soaring effect for lead solos. It worked really well with a good dose of overdrive.

The pedal feels rock solid and as with all EHX effects, I expect this pedal to go on for many more years.

The EHX customer service is fantastic so there’s no issue in contacting the company for support, should the need arise.

It’s amazing that a pedal of this tonal quality and futuristic build quality is priced so reasonably.

Again, it seems the guys at EHX are really upping the stakes in the pedal market, and if the Crying Tone Wah is anything to go by, the whole range of Next Step EHX effects is going to take the market by storm.

Expect to see EHX Next Step pedals on many pedalboards.