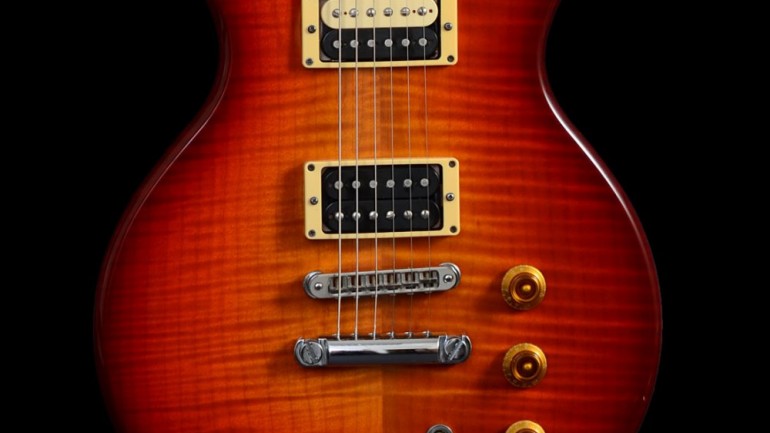 This review was submitted by Guitar Jar contributor: Mike Vande

In 1992, I had been forced to sell my number one axe, a beautiful Gibson Les Paul Heritage Elite. It was a wrench to let it go, but the need was so great I didn’t have choice.

…this is a gorgeous, well-designed & executed high-quality instrument… 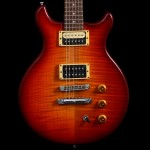 This left a big hole in my guitar arsenal. I didn’t have a two-humbucker solid body, which was the main set of tones I used in my situation at that time.

Shortly after, I ran across a Hamer Special FM at a music store not far from my home town. It was so gorgeous; I had to give it a play.

The instrument had a double cutaway mahogany body, with a flame maple top a good quarter inch think, not a paper thin veneer like a lot of companies were doing at the time. The top was so figured it looked like plaid cloth!

It came from the factory with a set of Seymour Duncan pickups, a JB at the bridge and a 59 at the neck. Each pickup had its own volume knob, and they shared a master tone control.

It plays beautifully, and because of the 24 1/2″ scale length, it’s easy to play with heavier strings than I normally use.

When I plugged it in and gave it a play, I was struck by the clarity and definition of the notes I played.

Regardless of the speed I played, the tone retained that definition, yet was full and rich sounding, not thin or overly “pointy”.

Because the Duncans were 4 wire, I had a coil tap for both pickups installed on a push/pull pot at the tone control. With the pickups tapped, the bridge p/up gives a very Tele-ish vibe, and the neck p/up is indistinguishable to my ear from the neck pup of a Strat.

This sucker NEVER goes out of tune, and the intonation has only had to be adjusted twice, at the factory and one time since, and I’ve had the guitar since 1993!

I did have to replace the output jack after about 5 years of use, because the springy tip connection lost its ability to hold the plug in the guitar. But that is the only part that has failed.

This is a gorgeous, well-designed & executed high-quality instrument. It has tone for days, and has proven nearly bullet-proof.

After nearly 20 years, it is still my go-to instrument. I can’t say enough good about it, and unreservedly give it my highest recommendation.

This review was submitted by Guitar Jar contributor: Mike Vande