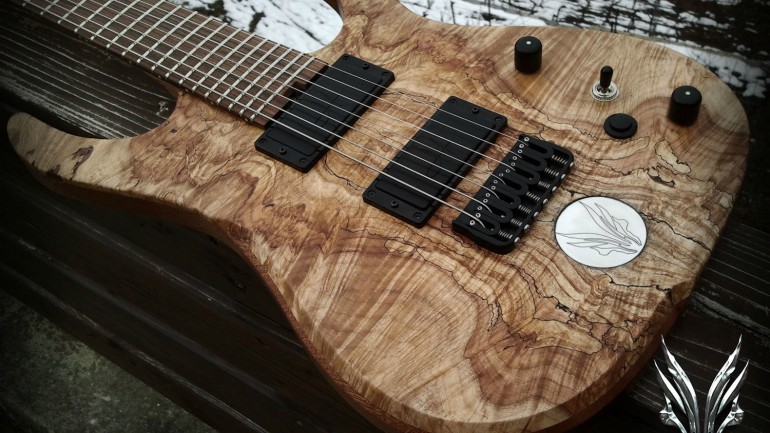 This review was submitted by Guitar Jar contributor: Sam Gelfand

…From the first day I contacted Patrick Hufschmid, he has done absolutely everything possible to ensure a happy build process, and a great instrument…

I’ve never played a guitar more comfortable. During the building process Patrick asked me to trace my left hand and send it to him so that he could get an idea of how to shape the neck, something I haven’t heard of many other luthiers doing.

When I received the guitar I was accustomed to playing on EB/MM Petrucci’s and was utterly convinced that a thinner neck meant a faster guitar. I very quickly learned that that notion was incorrect.

The neck on this guitar feels closer to that of a classical guitar, and will take a couple hours of getting used to for the player that’s used to toothpick-thin necks (don’t misunderstand me it’s NOT fat, just a different kind of thin than the Petrucci’s or say, an Ibanez).

After getting used to the different feel, going to back to any of my other guitars feels strange and foreign (EB/MM, Jackson, LTD, Ibanez).

The fretboard has no inlays, but Luminlay side dots. The lack of inlays was a bit of an adjustment as every guitar I’ve ever owned has had inlays.

Fortunately, the luminlay side dots make up for the absence of inlays very well, especially because they glow in the dark which catches your eye on a dark stage (I’ve not gotten to try them on stage, but I assume they’d be quite useful, and look pretty cool).

When I received this guitar, the action was unbelievably low. It was about as low as it could get without touching something.

Even though it was so low, there were no issues with fret buzz sustain or tone. Everything is perfect, and low enough that I barely had to try to fret a note.

The Hipshot bridge is incredibly comfortable for palm-muting, best bridge I’ve played on. The knobs are placed perfectly so that they’re just out of reach while picking, but not so far that you can’t get to them quickly if you need them. The knobs also have Luminlay dots in the middle making them incredibly easy to see when playing in a dark room or on stage.

While the guitar remains pretty conservative and simple as far as features go, I must say it is easier to use, and out-performs any other instrument I’ve played of similar price-range or otherwise.

Never heard a guitar that sounds clearer or cleaner.

The pickups were wound by hand by Mr Kent Armstrong himself, to fit tonal requirements that I did my best to convey through a lengthy word document.

I play a lot of Progressive Metal (think Petrucci), but also have to play a lot of Jazz, some Pop, and just generally cleaner styles of music for school. That said, I needed some incredibly versatile.

The pickups in my guitar fit everything I need them to do, while maintaining a transparency that really allows you to hear the wood and the strings themselves.

This may sound stupid, but sometimes I feel they almost have the response of an acoustic guitar; crystal clear, and very focused on the materials/components of the guitar instead of the electronics.

They are incredibly responsive to adjustments of the volume and tone knobs, and at the extremes are both brighter and darker than any pickups I’ve ever tried.

While this may not be for everybody (Though I don’t know who would complain about having versatile, responsive pickups), it allows them to get an incredibly wide spectrum of sounds. They are also capable of coil splitting making them even more versatile, however I can’t comment on their tone when split as haven’t tried it yet. All in all they’re the perfect pickups for what I’m trying to do.

As for the wood; my experience with this guitar forces me to say that every time I’ve heard anybody say Mahogany was muddy, they are wrong. The Spalt maple top is one of the most intricate and fascinating pieces I think I’ve ever seen, and the natural, oil finish gives the top a VERY 3D kind of feel.

As you run your hand across the top, you can feel every knot and line, almost as if it were a fine table or recently cut from a tree.

I’m not sure what else to say. This guitar has a very natural sound to it that fits every style.

I am a guitar student at Berklee College of Music, and needed a nice instrument that was built to my specifications since I’m devoting so much time and energy to guitar in school; one that would presumably last me at least until graduation.

The catch though was that I wanted a company that wasn’t hyped up, or posted about in Guitar Forums a billion times every day (i.e. BlackMachine, Strandberg, Daemoness, Invictus etc.), because I have a hard time putting faith in the word of the internet community of “guitarists” that just hype the newest gear.

I also noticed that the amount of hype and interest in companies similar to those mentioned will force them to do things like raise prices, create waiting lists, and extend build times, which is not desirable for a poor, impatient college student such as myself (i.e. Blackmachine, Decibel).

Please don’t misinterpret this as me saying that these companies are bad or shouldn’t be dealt with. That is NOT my point at all. This was just my reasoning for wanting something a little different.

I stumbled across Hufschmid guitars one day when I was looking for a luthier to commission for said instrument. The first thing I noticed was a complete and total lack of bad finishes or wood choices in any previous guitars built by Hufschmid.

After looking into some of the players that use Hufschmid instruments (Darius Wave, Leonardo Guzman, etc) and witnessing what the guitars could do, I knew I needed one.

From the day I contacted him, Patrick has been prompt to respond. Throughout my years playing I’ve considered going with other companies for a custom build, and sent them proposals similar to the one I sent Patrick, but have been turned off by their customer service and slow response every time.

Patrick was very personal, helpful and most importantly honest with his responses to my questions. If I came to him with a question inspired by something I had read on the internet, he would answer honestly and walk me through why he gave the answer he did. Having gone to college specifically for luthiery, he is incredibly knowledgeable about all things build-related.

Through every step of the process, Patrick was sending me e-mails and pictures to keep me up to date on the progress of my guitar. When we got started, he estimated that it would take 6-8 weeks to finish my guitar, but ended up getting it to my door-step within about 4 or 5.

Even now (3 or 4 months after the guitar was finished), I still receive weekly e-mails from Patrick that he sends to make sure everything is ok with the guitar. If ever there is something wrong, he will take time out of his day to get on Skype and walk me through fixing my guitar.

For example: one day I decided it would be a good idea to open up the control cavity just to take a look at how he did everything and in the process, I messed up my output jack. Within an hour, Patrick was on video walking me through fixing my guitar, and 15 minutes after that it was good as new.

I’ve never spoken to anybody that was as concerned about the customers utmost content as Patrick.

From the first day I contacted him, he has done absolutely everything possible to ensure a happy build process, and a great instrument. He succeeded.

This review was submitted by Guitar Jar contributor: Sam Gelfand