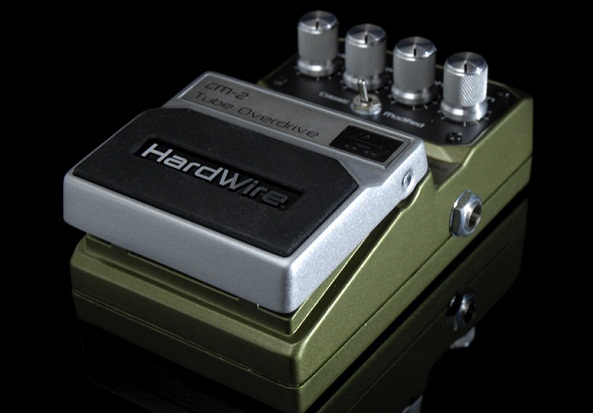 The Digitech Hardwire CM-2 Tube Overdrive features two usable gain modes and a flexible EQ, all housed in a rugged enclosure, producing a good quality sound at an affordable price.

…for the price, you’ll be pushed to find an alternative that is as well made, packed with as many accessories and  features… 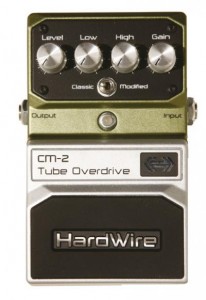 The Digitech brand often divides opinion; cheap and cheerful or great value for money. I have to admit, I agree with the latter opinion, especially when it comes to their well-respected Hardwire range.

The CM-2 Tube Overdrive, as with all the Hardwire range, comes packed with features and accessories.

The CM-2 is very much a “set-it and forget-it” pedal, allowing guitarists to dial in the desired amount of overdrive, and then use the guitar volume to vary the range.

A challenge you may find is choosing which of the two gain modes is most suitable for you. “Classic” is a familiar, responsive overdrive that reacts well to changes in the guitar volume, where as the “Modified” mode adds a touch more gain and low-end. To my ears, the Modified mode also sounds slightly scooped in the mids.

You may be the type of player that who would prefer a pedal to have a single mode, but I found it nice to have the flexibility to ramp it up a gear at a flick of a switch as and when required.

I’ve waited about 6 months to review this pedal, using it regularly with a Gibson SG Standard into either Marshall Vintage Modern (on the LDR setting) or a Marshall Class 5.

This pedal has lots of gain available, so much so, it borders on a distortion pedal at times. The Classic overdrive mode has a very familiar sound and feel to its tone. The Modified setting is great fun, allowing you to really crank out some fluid guitar solos.

Personally, I found the large amount of gain available slightly frustrating. For example, even putting the gain to zero and increasing the volume to use the pedal as a clean boost, the pedal still emitted a pre-set amount of gain.

In addition, this is a very loud pedal and you’ll probably find the volume dial is set lower than previous overdrive pedals you may have used. Again, this isn’t a problem, it’s just slightly unexpected.

This is a well-made pedal, with a good sounding overdrive that borders on distortion if needed.

For the price, you’ll be pushed to find an alternative that is as well made, packed with as many features.

I would say though, that although this pedal is good, I wouldn’t necessarily say it’s for the tone obsessed guitarist. The gain is really nice, but you’ll probably find that over time, the overdrive tone will sound ever so slightly fake; the people in the audience probably wouldn’t notice, but YOU will.