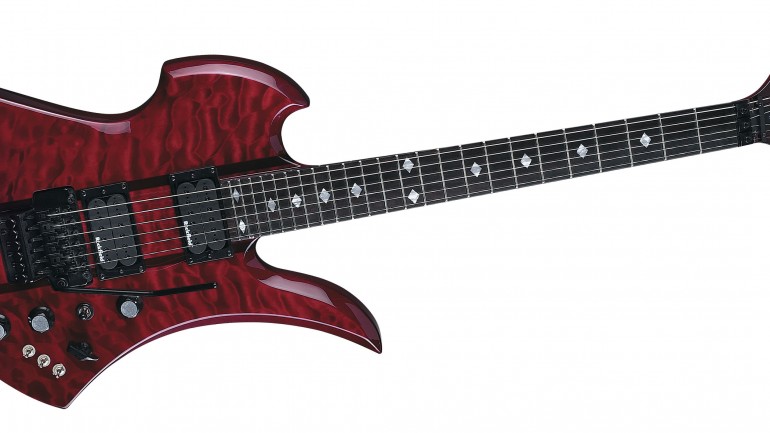 This review was submitted by Guitar Jar contributor: Ju Yun

I was a young boy when I bought this guitar. I loved Hide from X Japan and I just had to get a Mockingbird.

…good features for the money…

A mistake would be that I had no experience with this guitar whatsoever and bought it online, but I ultimately ended up loving it.

It has really good features for a guitar that I bought for 700 dollars.

The switches include 2 volume, 1 tone, 3-way pickup switch, a phase shifter, 2 coil taps, and a 5-varitone knob. The fancy switches really appealed to me, but I really do end up using only one setting.

The guitar has neck with a slim profile but big width.

I did have a bit of difficulty initially with playing quickly, but it gets better with time.

There is a bit of a bad thing about the location of the knobs. When the Floyd Rose bar is attached, accessibility to the tone and neck pickup knobs, and most importantly, the pup switch decreases significantly, raising difficulty of changing tone during play.

Also, I do have a bit of faulty wiring that made the guitar have a dead tone.

The Shape of the guitar takes a bit of time to get used to. If you slouch, the guitar will straighten you out as the points will dig into you. Here I’ve listed the bad things, but it is actually a pretty easy to play guitar

I did have a bit of issues with this.

I have never heard of Rockfield Mafia pups before I came across this guitar and I can say that they are very muddy.

The volume knob changes close to nothing, and the coil tap just kills the pups. I would say these pickups are appropriate for almost only metal.

As I mentioned, I did have a faulty wiring problem, but behind that, this guitar is very solid.

I think this guitar has really good features for the money, and I would definitely replace it if I ever lost it.

This review was submitted by Guitar Jar contributor: Ju Yun