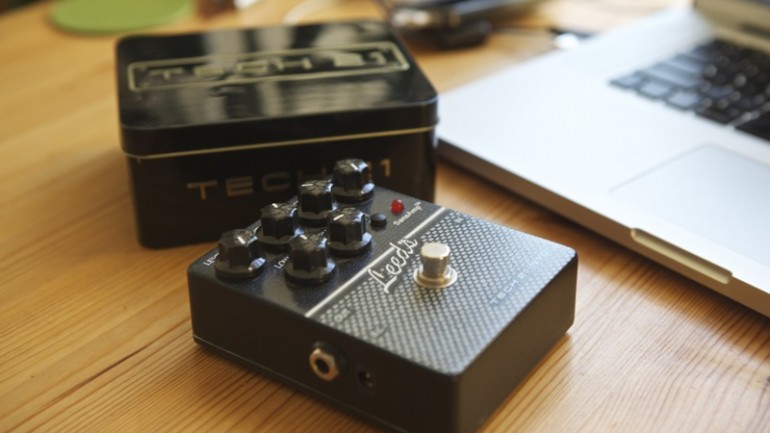 This review was submitted by Guitar Jar contributor: Vim

I own a Laney LC30 tube amp which I like a lot, but it is relatively heavy and I don’t want to take it with me to the practice room. 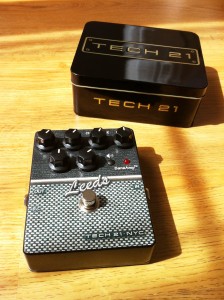 For several years I used the Boss GT8 both in rehearsals and onstage and was generally happy with it. But when I had the opportunity to try out a Tech 21 Leeds, I found it had a lot more character and dynamics than the Boss amp sims.

These controls are very efficient and dramatically affect the tone, though not in a way that makes it hard to dial in your sounds. In addition, there is a “character” knob, which is supposed to give access to various “historical” versions of the Hiwatt amps this pedal emulates.

In effect, the further clockwise you go, the more trebly “bite” you get (think the sound of the Hives).

The gain range will take you from very clean to very aggressive sounds suitable for most rock genres except the most extreme.

The second generation of these pedals features a switch that enables you to bypass the cabinet simulator, if you use the pedal straight to an amp rather than to a mixer.

The pedal works off a standard 9v power source, or a standard 9v battery. Tech21 say there is no need for a D.I. box after the pedal, even though the output is jack and not XLR.

The pedal controls work much like an amp’s with the exception of the “character” knob.

All the parameters are accessed by the knobs so they can be changed very fast.

There is no way to “save” the settings so a good idea is to put tiny stickers indicating where the knobs should point to once you’re happy with your sound.

Setting all the knobs to 12 o’clock provides you with a good starting point.

This is what won me over. I gave a try to an AMT F1 before and was not seduced by that pedal, although it has some excellent features that the TECH21 lacks (an FX loop for instance).

But the sound of the Leeds is full of character, full of bite, very defined, with dirty-ish cleans and clear-cut heavier sounds when you crank the gain knob.

There is a lot of bass if you need it, as well as a very high output (you probably won’t need to go pass 12 o’clock on the volume knob).

I’ve never played a real Hiwatt so I can’t compare, but even when not seen as an emulation, this pedal has lots of personality.

I haven’t used it for long and still have to use it live, but the build quality is very good, with a noiseless bypass switch and sturdy knobs. TECH 21 have a reputation for reliable equipment.

I like this pedal so much I bought another one in case I have problem with this one (I have no reason to doubt its reliability, but I like to have a backup whenever possible).

Many users report using this pedal for its Gilmour-like tones. I’m not particularly a fan of Gilmour, but again, this pedal has enough personality to nudge you on your way to a great, personal guitar tone.

I use it in conjunction with a Danelectro Transparent Overdrive and a Vox Satchurator.

This allows me to have more or less three “amp channels”, with an excellent base sound provided by the Leeds.

This review was submitted by Guitar Jar contributor: Vim