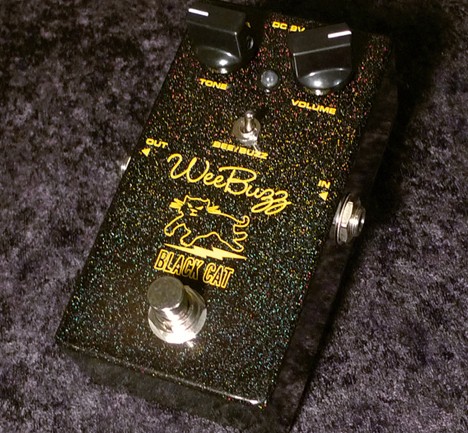 Black Cat Pedals has just announced the Wee Buzz, the first of several new products to be released in 2012. 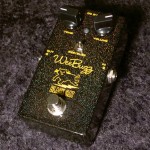 The Black Cat Wee Buzz is a slimmed down, more affordable version of their Bee Buzz. Both pedals are based on the original Roland Bee Baa. While the Bee Buzz is still very popular, Black Cat wanted to create a pedal for players who just want a little fuzz without all the fancy features… a Wee Buzz!

The Black Cat Wee Buzz employs the same circuitry as its big brother Buzz, but comes in a smaller, more “pedalboard-friendly” size with just the basic features. But the biggest difference between the Wee and the Bee is the absence of the Boost mode.

While the Boost is an important feature of the Bee Buzz for many players, for some it’s not essential. So the Wee is a Bee minus the Boost. That means the Wee Buzz is 100% Pure Fuzz! It doesn’t even have a control to dial in the fuzz because it’s hardwired to be totally maxed out all the time. The folks at Black Cat then took it a step further by using a higher gain transistor in the first gain stage of the Wee Buzz, giving it a bit more of an edge than the big Bee.

Check out www.blackcatpedals.com for further information.