This review was submitted by Guitar Jar contributor: Bertram

I’m always looking for pedals that allow me to expand guitar sound without transforming it into something else – the Electro-Harmonix Freeze pedal fits exactly to this request, so as soon as it was released I wanted it.

…it’s easier to use than a wah pedal!… 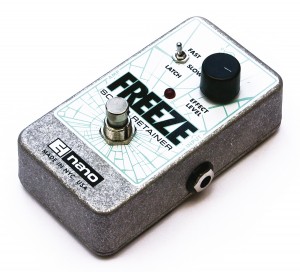 The Freeze is a simple and straightforward pedal: it samples a short fragment of sound in real time, loops it and allows you to hold it indefinitely.

Its controls are just a momentary footswitch, a volume/mix knob and a three position switch for the three different modes – two decay rates for smooth transitions and a latch mode in which you don’t have to keep the footswitch on.

Comes with its power supply.

Its use is intuitive and requires just a few minutes to be understood, then it’s just a matter of coordination – people familiar with loopers will switch easily, and it’s easier to use than a wah pedal!

Of course what to do with it is more tricky, since it’s an all new concept and there are no models to follow, it’s just you, your guitar and the Freeze!

With such a simple pedal – that doesn’t transform the sound – sound quality is not at all an issue, it’s up to the user to feed it with sounds that will expand gracefully!

You must not expect a straight guitar sound though, harmonics are frozen and some experimentations will be needed to find the right way to make it sound really good…

Bringing to the world of guitar players an all new effect, the Freeze is a basic pedal, that already has been expanded with the EHX Superego.

There are probably many ways to upgrade it but it’s also good to deal with the simplest form of it, it already has a huge potential, that I still explore.

This review was submitted by Guitar Jar contributor: Bertram