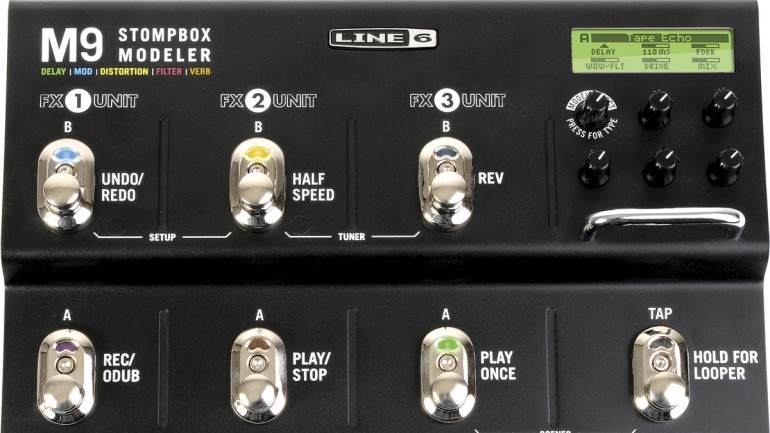 This review was submitted by Guitar Jar contributor: Tommy Niemann

I was originally looking for a delay and I was just going to go with the popular BOSS DD-20 or a Nova Delay but I felt like being different. 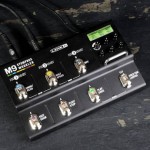 I worked at Guitar Center over the Holidays and I was talking to my friend John L, who is the pedal expert at the Guitar Center in Raleigh, NC, about how I needed one and he suggested to me the Line 6 M5, which is the smaller version of the M9.

I was immediately hooked and was intent on getting the M5 but then I learned about the M9. On the M5, M9, and the M13, practically all of the effects are “tappable.” On the M5only 1 effect can be used at a time though. With the M9 it’s 3 and with the M13 it’s 4. So I decided to go with the M9 because I was gonna get a sweet discount anyway.

The M9 is technically a multi-effects pedal but it is in a league of its own.

It has about 75 effects that are either overdrive/distortion (which sound surprisingly amazing), reverb (if you have a Holy Grail or any other kind of reverb, keep it, but there are a couple really cool reverbs called OCTO reverb which is like a shimmer effect and PARTICLE VERB which lets you hit a note and nothing happens at first but then it slowly comes back in particles), filter, delay (20 or so types of delay including analog and reverse delay, another advantage over the DD-20), and modulation.

There are 6 banks so one can have many different combinations of effects and you can run 3 delays at the same time (if desired, which is YET ANOTHER REASON I prefer this over the DD-20 and because the delay is a lot more controllable so you can have it stronger or quieter).

There is a tap tempo in the bottom right hand corner and when held down reveals a 28 second looper that can be overdubbed for days, run at half speed, or run in reverse.

You can control the volume of the loop effects by pressing the 2 first bank buttons. Holding down the 2nd and 3rd bank buttons reveals a tuner.

Bonehead simple. I never got a chance to mess with it before my first gig with it so I literally had to take it out of the box and slap it on my pedal board and use it without toying with it.

Figured the simple stuff out with ease and without frustration.

When I got the time to sit down with it and toy around, it didn’t take long AT ALL to find out all the details about it.

Sounds best when run before volume pedal or in an effects loop. The delay is easily preferred over the DD-20 and the Nova Delay in my opinion.

Solid as a rock. 2 strips of Velcro going over the length of the top and the bottom of underbelly of the pedal and it ain’t going nowhere.

Definitely worth the money, and looks awesome.

The reverb sounds fine but I would prefer a Holy Grail or any other reverb pedal out there.

This review was submitted by Guitar Jar contributor: Tommy Niemann