…Rob’s a performer with a message… 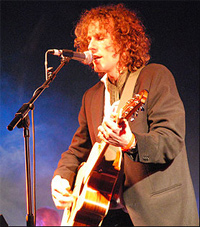 Rob’s latest album, The Perils the Grace and The Way has received BBC Radio 2 airplay and he’s recently appeared on BBC1 and Radio 2, ITV’s Daybreak and a list of local radio stations.

However, soon into his musical delivery, it’s quite obvious why a church seems a fitting venue. Rob’s a performer with a message. Between songs, Rob provides listeners with humble descriptions of his family upbringing and circumstance.

In addition, he talks about challenging topics. His website does a good job of summarising his narrative interludes:

“Rob’s life took a new direction after the death of his father in the terrorist events of 9/11 and this would be evident in his writing. He explores forgiveness and reconciliation with songs that challenge faith, politics and complacency and are delivered with a rough spirituality, brutal honesty and tested to be true.

He sings of his experience of life on the streets to his work with the homeless and his work with charities in developing countries; all these stories make their way into song.”

To be fair, that summary really says it all. Rob tells quite a story; from his teenage rebellion, to living on the streets, encountering his faith, through to the challenging aspects of battling his moral fabric with the events that surrounded his fathers death.

From a musical perspective, he was captivating to watch. I was watching his fingers like a hawk as he dynamically played his way through a repertoire of musical offerings. I have to say, all his guitars sounded great (my favourite being his Stratocaster – great tone!) and his vocal qualities were solid.

If you get a chance to watch Rob Halligan perform, go for it. I’m unsure if he “tells his story” at all his gigs, but he’s thoroughly engaging regardless.

He’s a good performer, comes across as a very down to earth guy and I can see why he’s had so many good reviews over the years.