To start this post, I’d like to express how gutted I was not to have attended the entire Sonisphere 2010 Festival (mainly due to lack of time and money). However, I arrived with my good friend Jamie early on Sunday morning, raring to go after a brief 2.5 hour drive from sunny Bournemouth, fuelled on RedBull and a Maccy D’s Double Sausage McMuffin breakfast… 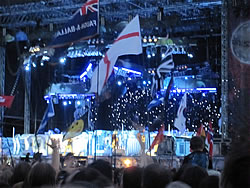 In my mind, Iron Maiden are the greatest band in the world. I’ve been a huge fan of Maiden since hearing my older sister banging out Run to the Hills in the early 80’s and knowing that Maiden were heading back to the UK it was a no brainer to go and see them play live again. The last time I saw them live, it was at Twickenham for the re-creation of the Live After Death tour, so it was nice to know whilst entering the Knebworth gates, their set list would mainly consist of material from the last 4 albums (including The Final Frontier).

Before I write further about Iron Maiden’s performance, it would be wrong for me not to comment on how well organised the festival was. In addition, all the people I bumped into throughout the day were great; very chilled out, up for a laugh, a good vibe all round.

Arriving at the festival, the first thing I laid my eyes on was the giant Booster fairground ride and being a fairground junkie I had to get that out of my system straight away. Jamie, no matter how hard I tried, was adamant not to throw up his Maccy D’s breakfast on the innocent bystanders below, so I ended up going solo. It was awesome!

Back to the music – one of the highlights for me was the RedBull stage/marquee. This was a really interesting venue, showcasing what seemed to be a good variety of up and coming bands. Interestingly a couple of these bands featured female guitarists who were extremely talented on their instrument.

Skindred was the first band we checked out on the main stage – coming highly recommended, I had no idea what to expect, except the term “Reggae Metal”… I wasn’t too sure what to make of that, but all my thoughts went right out the window when they played. I haven’t been that entertained by a band, especially at a festival, for a very long time. They were fantastic – they had the crowd in the palm of their hands and the material was perfect for the Sonisphere crowd.

Slayer was just a meltdown of all senses. With people roaring like lions all around me, grown men shouting “SSSSSSSLLLLLLLLLLLAAAAAAAAAAAAAYYYYYYYEEEEEEEEERRRRRRRRRRR” in complete adoration and circle pits forming everywhere, I simply couldn’t believe it. Their performance was fantastic; they looked like they owned the festival, let alone the stage. I’m well aware of Kerry King’s guitar playing, but it was Jeff Hanneman who blew me away – I thought his playing was faultless and was one of my highlights of the festival.

As a long time fan of Alice in Chains, it was great to actually see them play live, despite the fact they have a new singer – but close your eyes and you’ll swear blind that Layne Staley was still singing with them. I wouldn’t say their performance was mind blowing, but somehow they seemed to be a good choice for a Sunday afternoon at Knebworth. Personally, when “Rooster” started, I was more than happy to finally see them play live, and Jerry Cantrell’s wah drenched solos were great.

I skipped Pendulum to take an extended stroll around the site and to interact with some festival goers, asking them who their favourite Maiden guitarist is. I managed to get some answers on video (below) – interestingly, the few who I did ask all claimed Dave Murray to be their favourite, which surprised me somewhat as I always thought Adrian Smith would top the leader board.

There was only one act that I really wanted to see though and that was Maiden. Sure enough, they opened their set with “The Wickerman” and proceeded to play through songs from their last four studio albums (with the odd classic thrown in for good measure). Highlights for me were “Blood Brothers”, “The Reincarnation of Benjamin Breeg”, “El Dorado“, “These Colours Don’t Run”, “Iron Maiden” and of course, “Hallowed be thy Name”.

Iron Maiden were brilliant – full of energy and excitement. If I had to present a man of the match award, I would have given it to Dave Murray – his guitar playing was sublime all evening (and he did play a Les Paul during the set!). Maybe the random festival goers who answered the “favourite Maiden guitarist” question are right after all…