Guitar Lesson: Slurs (aka Hammer on and Pull off)

Slurs, commonly referred to as hammer ons or pull offs (depending on the direction of the slur) are a very popular technique used throughout a whole range of styles from classical through to speed metal.  I’m going to show you exactly what you need to do in order to learn this incredibly useful technique.

…we should have control of the dynamic between the two notes, you don’t want to have one note much louder than the other (or maybe you do, that’s your call!)… 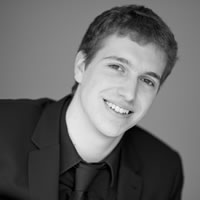 When playing slurs we should always aim to make them clear, articulate and rhythmically accurate.  We should also have control of the dynamic between the two notes, you don’t want to have one note much louder than the other (or maybe you do, that’s your call!)

Ascending slurs (or hammer ons as they are commonly referred to) are typically the easiest type of slur to execute.  They involve plucking the lower of the two notes and then hammering onto the string with a finger of the left hand to create the second note (usually on the same string, however you can hammer onto a different string once you have developed the basic technique).

As outlined above, we want our slurs to be rhythmical.  In other words, we want to be able to determine the length of each note.  When first attempting this technique, it is easy to fall into the trap of trying to play both notes in quick succession as it’s assumed that the faster we play, the louder and clearer the slurred note will be.  This is not true.  We can achieve a clear and articulate slur without even playing the first note, however it does help when learning the technique, to move from a played note to a slurred note.  This lesson is going to focus on slurring notes on the same string. 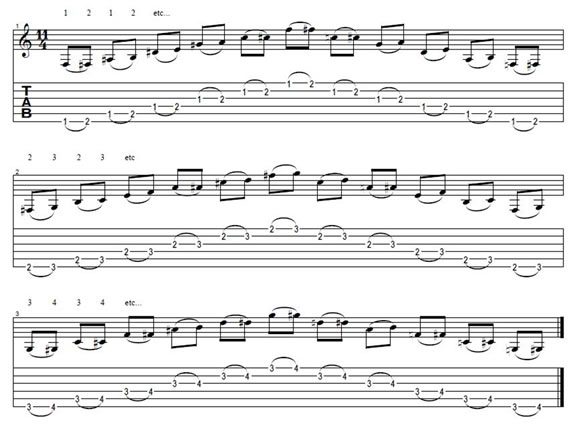 Descending slurs are the type of slurs which can be a little more difficult to execute.  One of the most common mistakes to make as an acoustic/classical guitarist is to lift the finger away from the string as quickly as possible.  This can work well on the electric guitar as it tends to be a little more sensitive to touch, however when playing the acoustic or classical guitar, this is by far the least effective way to get the pull off to sound correctly.

When executing the pull off, you are effectively plucking the string with one of the fingers of the left hand.  To get the best sound from your pull off you have to pull your finger across the string, much in the same way as you do when finger picking with the right hand.  Some players find it is easiest to pluck the string with the left hand and rest the finger briefly on the next string (i.e. when pulling off from the 2nd string, they rest on the 1st).  Others find it is better to slur the string and just miss the string below, the direction of the finger travelling at about 45 degrees away from the fret board.

The best thing to do is to try both ways and see what works best for you at the moment; it’s likely that you will continue to refine this technique as you progress as a guitarist.  I don’t think I know anyone who has approached a new technique and got it exactly right the first time.  It takes a while before you become comfortable with any new technique, so give it time… and practice!

Try the following exercise; it’s basically the same as the one above but in reverse.  Again, be sure to play in time and keep each note consistent in length. 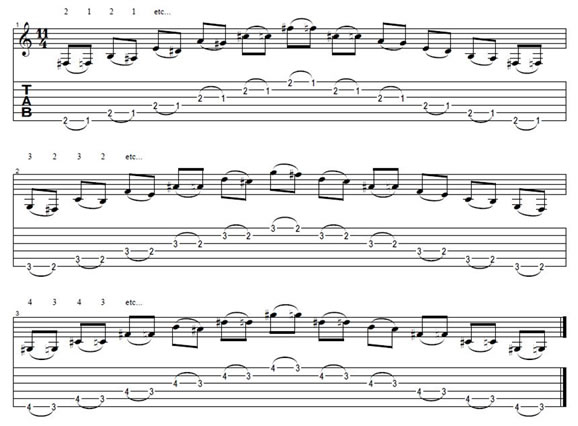 Ed Peczek is a professional guitarist who performs all over the UK as a solo guitarist and session musician with various bands. He provides private guitar lessons in Manchester and also runs a beginner guitar course for adults and children.

For more guitar lessons and advice on learning to play the guitar, please visit the website: