Style Over Substance: Is image more important than talent?

Recently, I’ve had some interesting conversations with friends with regards to breaking into the mainstream music scene. For many guitarists, it’s likely you’re in a band, gigging regularly at venues on the local “gigging circuit” and your band may have a few 100 fans on Facebook.

Even if you can solo like Slash or improvise like Hendrix – is that really enough to help your band go to the next stage in their musical career?

By choosing what kind of image you want to portray to your audience, you create a cohesive theme within your music. This also conveys that you’re in a solid unit. – Dan Henry, The Longest Day

When Susan Boyle walked onto the stage during the 2009 Britain’s Got Talent TV series, the majority of people in the auditorium (including the judges) were sniggering away thinking “Here’s another crackpot who thinks she can sing…” We all know the outcome – sure, she may not have the image the musical industry is looking for but she can sing – her talent completely shines through.

It seems numerous factors  contribute to help launch the careers of talented bands/artists from the local live music scene into the mainstream, but one major player in all of this is “image”. I’m a fan of music of all genres and although “image” seems to have always been important throughout the past 50 years in the music scene, it somehow now seems nearly impossible to “make it” on talent alone. 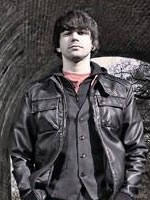 Dan Henry from The Longest Day

I thought I’d ask a couple of people involved in the live music scene their opinions. Dan Henry is the lead singer and rhythm guitarist from the Poole based band The Longest Day, who’re currently making big waves across the whole of the UK with their amazing live performances. When I approached Dan to ask him his thoughts on the importance of a band/guitarist having an image, he responded with:

“I think band image is very important, saying that though, the focus of your band should not rely solely on it. Creating and deciding what you want your image to be is also part of the fun. By choosing what kind of image you want to portray to your audience, you create a cohesive theme within your music. This also conveys that you are in a solid unit.”

An interesting point and this is something The Longest Day have achieved brilliantly. As a band, in my mind, it’s only a matter of time until they are signed – they have great material, sound good both live and on recordings and all members are highly talented. To round it off, they have a collective image that unifies them as a band.

I thought I’d throw this question out to Bournemouth based photographer Tim Churchill, who’s taken numerous photo shoots for bands across the South of England.

As mentioned previously, so many factors can go into taking your solo act or band to the next stage in their musical career, and it seems increasingly in this day and age that the image of the artist is so important, if not the most important aspect.

Personally, I think it’s a shame that an artists image is seen to be so important, as I’m more into the music than anything else. I know many guitarists who couldn’t care about their image – but maybe they should if their aspirations are greater than playing the local boozer, no matter how good their guitar talent is.

What are your thoughts? Are you in a band trying to jump to the next stage? Are you struggling with the importance of your band’s image? Please share your thoughts and experiences with Guitar Jar.