Queen is a band that forms the cornerstone for many people’s musical foundation.

With the solid rhythm section of Roger Taylor and John Deacon, to the exceptional talent of Freddie Mercury (arguably the greatest front-man of all time), through to the energetic and melodic guitar playing of Brian May, they have a musical past that stretches 40 years with albums that embrace an eclectic mix of genres & influences.

But which album or more precisely, which song, finds Brian May in his finest moment?

…In my opinion, it’s one of the finest guitar solos of all time – exceptionally well played, packed full of tone and melody, but more importantly, emotion… 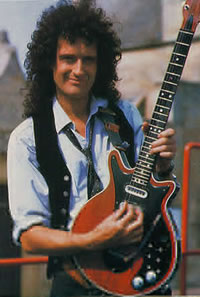 Brian May and his “Red Special” complemented Freddie’s vocals perfectly. His guitar playing throughout the years is vocal, melodic & expressive.

Queen I and Queen II display a rawness in Brian’s playing, and to this day I’m still in awe at his rhythm on these early albums. “Keep Yourself Alive” perfectly sums up the energy of the band in the early years.

“Procession” on Queen II is an insight into Brian’s fondness of layered guitar lines and “The March of the Black Queen” sees the entire band firing on all cylinders with Brian’s energetic playing fuelling the fire.

“A Night at the Opera” and “A Day at the Races” presents the listener with two albums of extremely high musical offerings. The song writing is exceptional, and for many, this can be summarised in “Bohemian Rhapsody“. Brian’s guitar lines, along with Freddie’s operatic melodies, simply roll off the tongue – when you listen to Bohemian Rhapsody, do you find yourself singling along to the guitar solos, and head banging to the “rock” interlude after the operatic section?!?

Arguably one of Brian’s finest moments is on “Love of my Life“. An acoustic offering that has earned cult-status among Queen Fans the world over and a firm favourite in live their performances. This song perfectly demonstrates Brian May’s creative diversity.

Another blinding album in “News of the World” finds Brian in exceptional form, and it’s the blues-inspired track “Sleeping on the Sidewalk” that does it for me. Many wouldn’t associate Brian May with the blues, but this one-take performance sees Brian laying down blues riffs as good as the next man – full of fun and energy.

Moving into the eighties saw a slight change in the musical direction of Queen. Slightly more refined, maybe more mature; their songs seemed somewhat more commercial than their previous offerings. Needless to say the band were still pushing the boundaries, with all members evolving further in their creative space.

“Another One Bites the Dust” may be remembered more for John Deacon’s groovy bass line, but just listen out for simple, yet highly effecting funk guitar from Brian. This leads nicely into “Hot Space”, an album that deserves more recognition by the general public, seeing Brian push the funkier side of his playing to the fore.

“The Works”, “A Kind of Magic” and “The Miracle” are three albums that saw the band launch themselves further into the forefront of people’s minds. Brian’s playing continues to be refined on these albums, embracing guitar lines that are calculated, yet devastatingly effective.

“Who Wants to Live Forever” features a short but simple guitar solo, slotting perfectly into a simply awesome song. Brian’s playing is exceptional on this track; subtle and highly emotional.

“I Want it All” is a classic rock song that doesn’t deviate at all from Queens rock foundations whilst “The Invisible Man” finds Brian complementing a synth-style song. “Brian May! Brian May!“.

The “Innuendo” album is a fitting way to end Freddie Mercury’s time with the band. All the songs are of high quality, with the underlying tone that Freddie wouldn’t be around for too much longer after the album release. The title track is fantastic, with Steve Howe guest starring on the flamenco interlude and Brian following him with a soaring electric guitar solo.

Queen has blessed the world with such an impressive collection of albums and songs over the past 40 years and it’s incredibly difficult for me to pick just one song that I consider to be Brian May’s finest moment.

I make no secret that I’m a fan of early Queen, with their first 5 album being firm favourites of mine. Brian May’s guitar playing on these early albums is incredible, and although Freddie Mercury was an exceptional talent, I firmly believe it was Brian’s guitar tone, energy and sublime playing that really pushed Queen to the fore.

Yet, strangely enough, my favourite Brian May moment isn’t from these early albums.

For me, Brian’s finest Queen moment can be summarised in one guitar solo – the solo featured on the song “These are the Days of Our Lives“.

In my opinion, it’s one of the finest guitar solos of all time – exceptionally well played, packed full of tone and melody, but more importantly, emotion. The entire track is highly emotional and Brian’s guitar solo perfectly demonstrates all of his playing characteristics.

This guitar solo can cause you to stop you in your tracks; almost leading you to reflect on your current circumstances and to evaluate what really is important to you at this moment in time.

The solo from “These are the Days of Our Lives” is sublime and features aspects of guitar playing that all guitarists can learn from, and is arguably Brian May’s finest moment with Queen.